Kittihawk, 1903.  Wilbur and Orville Wright, up at an insanely early 5am, listening to the wind singing in the wires of their fragile aircraft.  They’ve been doing this for three years – in fact ever since they had the idea of attaching wings to the bicycles their repair business operated on.  Whatever else drove them to that lonely beach it wasn’t the prospect of making money out of selling aeroplanes – there was no aircraft industry, just a bunch of crazy enthusiasts like them. 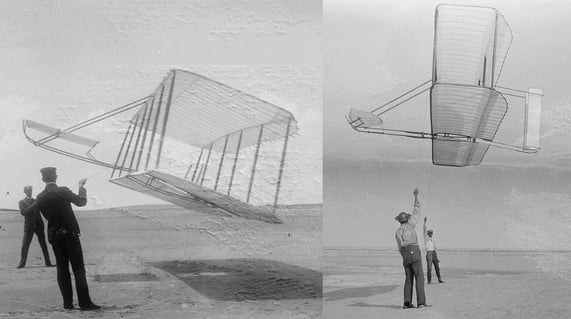 Or Louis Plante, a lover of rock music but someone who faced a big problem every time he went to a concert. People generally don’t like coughing during the music – but for Louis it was an essential part of his life. A sufferer since birth with cystic fibrosis coughing was the only way to shake up the fluid in his lungs and allow him to breathe.   During one concert he was sitting close to one of the big PA speakers and suddenly found himself wracked by a particularly strong coughing fit.  It was so strong he was forced to leave the concert – but a spark of an insight began to develop in his engineer’s brain.  It seemed that whenever the bass line was particularly strong this would happen– and he quickly made the connection between his coughing and the low frequency vibrations in the hall. He experimented, swapped ideas with others and eventually developed something called the Frequencer, a device that clears mucus from the lungs as effectively and more gently than traditional clapping therapy does.  Just like the Wright Brothers he didn’t have dreams of avarice – he wanted something for his own benefit and if others could benefit from it, so much the better.

These are two of countless examples of what Eric von Hippel calls ‘free innovation’.  For decades he’s been studying user-led innovation, pointing out that many innovations have their origins not on the drawing boards of large corporations with big R&D facilities but in the experience of frustrated users:

In fact, users have been the original source of many innovative ideas which have later been taken up and developed to scale by manufacturers.

Free innovation (FI) represents an extreme version of this in which the motivation to innovate is essentially not profit seeking. Drawing on the results of extensive research in six advanced industrial countries he suggests that this is not simply a handful of amateurs tinkering at the edge. In the area of ‘household products’:

‘….tens of millions of individuals …have been found to collectively spend tens of billions of dollars in time and materials per year developing products for their own use’.

These included gardening implements, kitchen devices, child and pet-related equipment through to software and hardware and medical innovations. For all of these millions of innovators the primary motive was ‘self-reward’ – they wanted the things enough to develop them for themselves.

This appears to challenge the foundations of our thinking – after all Schumpeter’s famous and influential model of innovation sees the profit-seeking entrepreneur at the heart of economic growth. But looked at more closely we can see that there are situations – like those above – in which users primary motivation is to solve a problem or develop something they desire for its own sake and not for wider consumption.

This doesn't mean that others can’t benefit – first of all there are clear advantages for the wider community of people with similar interests. Here free revealing and sharing behaviour works to everyone’s advantage – if we each give a little then we soon have a lot. But the opportunity also exists for mainstream producers to pick up on these early ideas and bring them to wider markets, investing their expertise in return for the income streams from those new product categories.

Think about your own experience – chances are that at some time in your life you have spent time as a user innovator – fixing, modifying, adapting and occasionally inventing.  Now multiply that common experience across the population – and you get a glimpse of a powerful but underexplored type of innovation. It's the engine behind some significant developments – for example, communities of free innovators created the early versions of Linux because they shared a desire for better, more robust software.

The book is built on strong and deep research foundations. Based on the early theory around user innovation which emerged in the 1980s with von Hippel’s book ‘The sources of innovation’, a vibrant community has grown up, exploring what innovation means in an era of open and crowdsourced possibilities. Whether it is in social care, computer software, household products or extreme sports, a new approach is emerging around free innovation.

Although he claims that free innovation represents ‘a new paradigm’ von Hippel is at pains to point out that this doesn't mean a competition between this model and the longer-established producer-led (PLI) model. Instead there are real opportunities for the two to work in tandem, exploiting the complementarity between them. In particular:

So a potentially powerful model for the future involves close coupling between these two modes of innovation:

Characteristic of any good book on management thinking is its ‘ripple potential’ – how far does its arrival disturb conventional thinking and spread out in many directions, raising questions and opening new avenues. Measured on this scale ‘Free Innovation’ is probably quite a heavyweight with the potential for a big splash. Certainly it raises a whole string of interesting questions – for example: