Understanding Your Innovation Culture – A Business Insight From Swisslog

by Colin Nelson Feb 22, 2016 6 minutes to read
How do your company’s employees react when asked to participate in enterprise collaborative innovation?

It can be hard to understand whether you have an ‘innovation culture’ and to what extent that’s propagated the organization, however, running idea campaigns helps to develop a clearer picture.

An example from Swisslog

Swisslog appointed a new Innovation Manager in 2011, an experienced innovator from the Aeropace industry – Mike Hatrick.  A cornerstone of Mike’s innovation program was to establish an online corporate innovation application, allowing anyone in the enterprise to share ideas against current business challenges and opportunities.  As a new employee, Mike wasn’t sure what opinion employees held about corporate innovation, the same challenge for new innovation managers in any role.

“I had introduced a similar collaboration platform in my previous job” says Hatrick. “I remember launching the first challenge and waiting pensively to see what would happen. Would people participate? Would we get a few ideas or many ideas? At Swisslog it was just the same; I couldn’t know for sure what would happen”.

During an initial series of innovation campaigns, Swisslog and their innovation partner HYPE looked to understand how the program was perceived and how to drive more innovation from the 1,200 employees invited to participate.

After some initial small scale enthusiasm participation seemed to drift and overall engagement dropped.  It was clear that the culture wasn’t the same as it had been in Mike’s previous role, so his approach had to change.

“I came to Swisslog feeling relatively experienced in this field having already run 15 campaigns, all with high levels of participation” Mike continues, “When participation at Swisslog started to drop-off in the fourth and fifth campaigns I was concerned; I had anticipated the audience to be highly engaged by then. In fact, I wasn’t just concerned – I was worried, because something was happening that I didn’t understand”.

What Swisslog experienced, like many organizations, is that the employees could be grouped into the following categories: 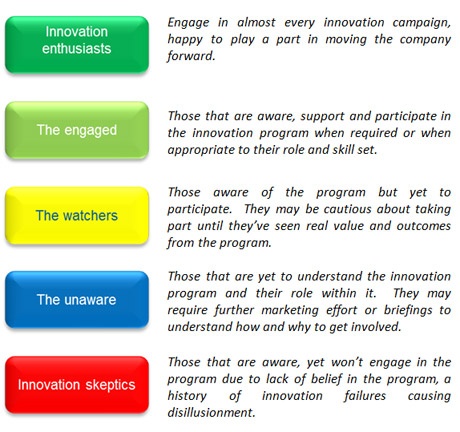 Unless there’s been a history of innovation failures or substantial marketing associated with the new program, perhaps most innovation professionals would expect their organization to fall into the following shape after an initial 3 month running period:

Most companies would say they’re looking to pursue an innovation culture.  At its most simple level, this means a select group of employees are highly enthusiastic about getting involved, and the majority are happy to participate when they can. Importantly, all employees understand the value of getting involved and will share ideas, thoughts and concepts.

Many expect the biggest challenge is to raise awareness and build belief, thus moving those in the red, blue and yellow categories into the green categories.

Once you know what ‘shape’ your organization is, how do you best move it forward?

Firstly, HYPE and Swisslog took a careful look at the participation statistics over time, in addition to the quality of contributions; they jointly established that most people were still in the blue and red categories.

In-fact, what we discovered was the organizational shape was as follows: 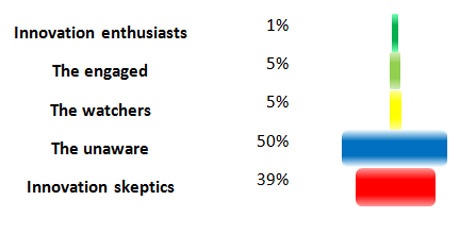 Mike observes “I found it extremely useful to start viewing my user community with this model. With any problem it’s important to gather and understand facts and root cause before trying to fix it. For example discovering that we had a large proportion of skeptics affected the actions that we took. I also became more aware of the importance of the small group of Innovation Enthusiasts and that I needed to keep them highly engaged”.

Setting the program back on track

Swisslog and HYPE refocused the program with a new direction, addressing the following challenges:

A new series of innovation campaigns was established.  Senior sponsors were sought for each campaign, preferably non-innovation professionals to demonstrate that a wide range of stakeholders were getting involved.  The topics selected were relatively tactical, yet in-line with the corporate innovation initiatives, so everyone could see the correlation with initiatives they cared about.  This enabled Swisslog to talk about progress and actions in wider communications with the company, therefore building more confidence in the program. 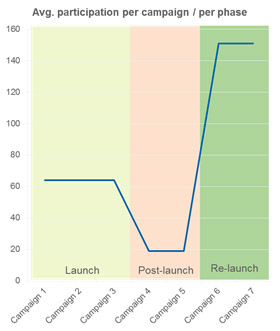 “Getting an executive sponsor on-board for each challenge was by far the most important improvement we made. It does require more effort up-front, and typically I had to change the timings of campaigns to suit the sponsor, but the benefits were extremely visible. For example I could see new functional/ geographic groups getting involved, particularly from the sponsor’s area of the company. Review teams were more engaged and proactive and of course ideas started to find a faster route to implementation. It was clear that the users perceived the program to be more credible and relevant to them”.

Next steps for Swisslog

Together with HYPE, Swisslog aims to establish an innovation culture which ensures everyone’s aware and engaged with the innovation process, moving the organizational shape to the following over time.

In order to do so, Swisslog will be focusing on:

Hatrick concludes: “Our program has been running for one year now and has delivered good results. Importantly, the user community is well engaged and the observations we made mid-year helped us to make the right changes to keep building a successful program. The success of the program is all down to the participants, without whom there are no ideas or collaboration! We have to keep the program vibrant and relevant to them no matter which of the categories they are in. For example, we have monthly newsletters to convince the ‘Innovation Skeptics’ that the approach works and make the ‘Unaware’ more aware. We are also introducing Mobile Apps to improve accessibility that should help ‘The watchers’ graduate towards being ‘Innovation Enthusiasts’ ”.

This article was originally published on InnovationManagement.se 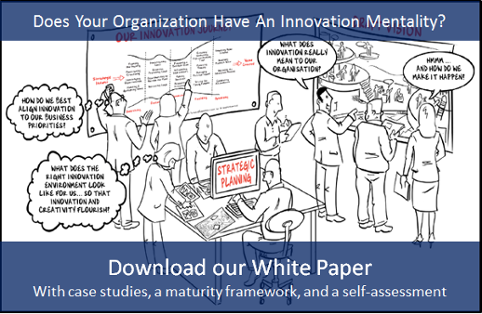 Colin specializes in the social science that underpins how large or diverse groups collaborate online. He is an expert in the field of Collective Intelligence, supporting global organizations and comm unities on how to achieve efficient, effective, and sustainable innovation and business change using online tools and processes. Colin is a respected thought leader on Innovation Management and Enterprise Collaboration, publishing numerous articles on the topic. Colin has a background in Market Research, Information Management and Management Consulting. However, for the last 10 years he’s worked in new product development, Innovation Management and Collective Intelligence.
MoreLess