Taming the complexity of innovation management

Is business and innovation more complex now than ever before? Probably not. But it certainly feels like it. What is different today is the pace of change. Consider that 60% of Apple’s revenues come from products released in the last four years. Or that in 1960 it took 20 years to replace one third of Fortune’s 500 companies - and in 1998 it only took 4 years. The vicissitude of market dynamics and new technology is enough to make you giddy if you sit and watch too long. When change is happening so fast and complexity is sprawling out in every direction, the ability to simplify becomes a competitive advantage.

The increasing role of design in the innovation process is a sign that taming complexity is a growing endeavor. Companies are partnering with design firms to bring a simplified-centric approach to their products - see GE’s recent collaboration with Frog Design on their all-in-one kitchen gadget. At a recent conference on Open Innovation in Amsterdam the prevailing thought was that design thinking must be included deeper into the R&D process. By observing and listening to the customer in their own environment you get truer insights into the pain points. R&D departments also agree that opening up dialogues via open innovation is not only desirable, but absolutely necessary. P&G is the classic example, but Philips is also a lighthouse case - where once guarded fences surrounded the famed R&D facility in Eindhoven, now the fences are gone and anybody carrying a novel idea is welcome. Inviting more voices into the room might sound like increased complexity and for sure managing IP and ownership remains a worry for companies, but the technology and best practices available to organizations today makes quick progress a real possibility.

Those companies not taking the steps now might find themselves nervously looking at the pace at which competitors are introducing breakthrough innovations in the coming years. Gigaset offered up a tantalizing glimpse at its open innovation efforts with their Elements solution for home monitoring - it took 170 external experts from 19 different companies, speaking 11 languages, to help Gigaset develop the Elements product. Not bad for a handset phone maker. 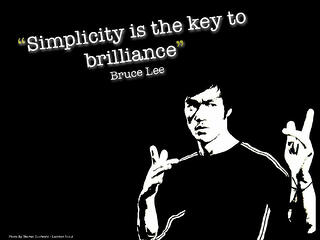 The Economist last week (Schumpeter) comments on the recent 5th Annual Peter Drucker conference in Vienna. The theme of the event? Managing complexity. One solution being offered up at the conference was to impose simplicity. Natarajan Chandrasekaran of TCS - with 300,000 employees - agrees that the only way to avoid being blinded by complexity is to focus on a few simple things, which provide direction for both the business and the workers.

The German Mittelstand serves as an example of companies who know a lot about focus - thousands of medium sized organizations boost the German economy by supplying high-quality products to larger firms. The pursuit of innovation at these companies is something we know very well at HYPE having had the good fortune to work with many of them. In Great by Choice Jim Collins talks about an ability for companies to ‘zoom in and zoom out’ - this skill is a key aspect in successful innovation management. Companies must zoom in on the areas they want to bring diversity and perspective - making tough choices about the problem statements they want to open up - then zoom out by allowing for a wide array of opinions to surface, letting diversity play its part, until eventually zooming in again with the decision making process.

Nowhere more obvious than the financial sector can the inflictions of complexity be more strongly felt. In 2006 the CEO of Lehman Brothers quipped, “There is no doubt, this is our century!” only for the world to watch as the enormous company disappeared down the toilet two years later. Derivatives and crunching algorithms unleashed a nightmare of complexity on what is otherwise an industry based on simple principles. Another financial sector giant RBS last week had more problems with its infrastructure - with customers being locked out of their online accounts, not being able to use their cards, and seeing money vanish. An RBS spokesperson admitted they had failed to invest enough in their IT systems. Undoubtedly the demands of modern banking on IT infrastructure is immense and complex, especially with the omnipresent need for mobile banking. But one hopes that the industry is able to tame this complexity and make robust, secure, simple systems. The Economist helpfully reminds us that “the biggest threat to business almost always comes from too much complexity rather than too much simplicity.” 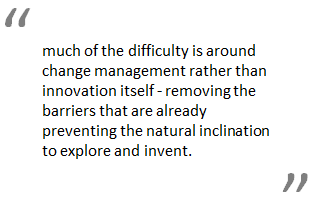 Making things simple is not always the answer. Airbus cannot remove the inherent complexity of making the A380 fit for purpose - nor would we want them to. Embracing that complexity is what makes Airbus capable of doing their job and being a leader in their field. But when it comes to innovation, it is no longer the fuzzy grey area it used to be. For just over ten years now the discipline of collaborative innovation management has been developing at a steady pace. As the industry matures we are now seeing an abundance of best practices along the different stages of the process. The trailblazers like P&G and Philips have worked out the kinks in open innovation, while Deutsche Post and NSN have figured out 'closed' co-creation. It might not be so obvious on the surface, but much of the difficulty is around change management rather than innovation itself - removing the barriers that are already preventing the natural inclination to explore and invent.

We’ve found that building an array of packaged practices to tame complexity in innovation management is necessary, because every company is different. It’s a prerequisite to match the solution with the cultural DNA of the organization to truly achieve measurable results. The front-end of innovation is often called the fuzzy front-end due to the uncertainties that come with bringing diverse, unfamiliar, and potentially unruly opinion into the innovation process. Ultimately taming this complexity is what we continuously search for, so that companies are able to focus on the business of actually innovating their products and services, and not figuring out the secrets to harnessing the fuzzy front-end. As another new year beckons, the team at HYPE is more excited than ever about our mission to simplify innovation management, and to share our experiences with you. Kittihawk, 1903.  Wilbur and Orville Wright, up at an insanely early 5am, listening to the wind singing in the wires of ...