How Continuous Improvement is Dependent on the Details

The Tour de France is a gruelling race, clawing your way up mountains, pounding along mile after mile of roads – and all with the whirr of gears and the click of your competitor’s pedals in your ears.  Winning the precious yellow jersey, each day is a real feat – and managing to hold on to that lead through time trials, hill climbs and general jostling with the others in the peloton before the final triumphant roll into Pairs is something else.  For decades this was the province of the French and Belgians but others began to nibble away at that leadership.  Individuals – not always working legitimately – began to take the title.

But in recent years a system has taken over.  In 2012 Bradley Wiggins became the first Briton to win the Tour de France – and this feat was followed by an astonishing run of success by Chris Froome.  Team Sky have won the Tour five times since then, only narrowly missing out in 2014. And the model is transferable – in 2012 Dave Brailsford (the man behind Team Sky) coached the British cycling team at the 2012 Olympic games, dominating the competition and winning almost all the gold medals available. 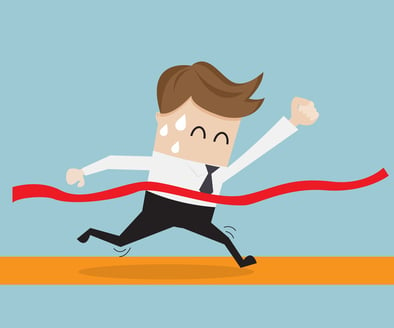 Whilst Wiggins, Froome and the rest of the team are dedicated athletes there is something more – something which the team themselves acknowledge.  It's a philosophy, a drive towards perfection in which the little things matter. Brailsford calls it the  ‘marginal gains’ model, basing it on the belief that a small improvement of 1% in every aspect of cycling would add up to a big performance gain.

The team started by focusing on the obvious elements – the training programme, the nutrition regime, the cycle design and ergonomics and the weight of the tyres.  But they went well beyond this, searching for improvements in areas overlooked by others – for example finding the pillow that offered the best sleep and taking it with them to hotels, or teaching riders how to wash their hands to avoid infection.

It’s a simple idea – little steps matter, especially when they are all in the same direction.  And there are plenty of examples of innovations which have made a difference - not through a sudden big bang but rather a slow continuous attack on a problem.  Driving incremental improvements may seem small stuff but it’s worth sweating.  As the Scots used to say ‘ many a mickle makes a muckle’ – in other words, the small stuff adds up.

We tend to focus on the dramatic – of course, that's the exciting story, the breakthrough development.

Despite the obvious wisdom in such a principle it is often difficult to apply to managing innovation. The reality is that behind every breakthrough is a long gruelling struggle with the small stuff. Debugging the software, working through modifications and adjustments, most radical innovation is about a breakthrough idea and then a lot of sweating the small stuff.  Edison’s light bulb may have been a key moment in the history of illumination but it was the step-by-step incremental improvement of it which brought the cost down and the quality up to the point where it became a household item.  Backstage behind the automobile revolution was the challenge of producing petroleum at the right quality – again the consequence of incremental innovation in refining the crude oil.  Synthetic fibres like rayon opened up a whole new world of fashion design and textile use – but it also depended not just on breakthrough molecules but on the incremental improvements to bring their cost down and their quality up.

Wherever we look the importance of incremental innovation shows through.  Our smartphones have appeared in our hands remarkably quickly – it’s only a decade since Apple launched the first and only ten years before that when we switched from carrying bricks to handheld devices.  To make that possible requires enormous attention to detail, to driving down costs and pushing performance up.

We might think in terms of learning curves – the idea that the more we make of something the better we get at it.  This comes from studies of airframe design in the 1930s where improvements in both product and process emerged as volumes increased.  But it's not a natural law - instead it is an observation based on the principles of sweating the small stuff.  Paying attention to the little learning opportunities for incremental innovation drives us along the learning curve.

Just as we need to organize a project team to carry us forward to a new generation or a breakthrough product so we need to organize for incremental improvement.  It only works when attention is focused and where efforts are coordinated and directed.  And where there is a motivation to contribute ideas, to suggest and challenge, to build and share.

We can see this at work in the many long-running continuous improvement programmes, visible in well-known examples like Toyota, but also operating right across the worlds of manufacturing and services and out into the public sector.  Such programmes link two powerful principles – the idea that of you ask them employees will probably have many ideas for improvements and the notion of focussing that problem-solving power on a key strategic target.

Employee suggestion schemes date back a long way – probably the earliest formal version was used by the eighth shogun of Japan, Yoshimuni Tokugawa.  In 1721 he posted a note saying: “Make your idea known…. Rewards are given for ideas that are accepted.”  Across the other side of the world in 1871 Denny’s shipyard in Dumbarton, Scotland began using suggestion boxes, inviting ideas for improvements.  And John Paterson, head of the National Cash Register company in the USA began experimenting in 1892 with ways of tapping into ‘the hundred-headed brain’ of his workforce. These days such schemes are everywhere – and they pay off.

For example British Airways ran a campaign to try and help reduce fuel costs by asking for suggestions and around 200 ideas were sufficiently useful to be implemented.  These included saving £600,000 a year in by descaling the toilet pipes on its planes and making them lighter. Other ideas out of the 200 submitted, included replacing glass with plastic for wine bottles, reducing the volume of water tanks, washing engines more regularly, lighter catering trolleys and cargo containers and introducing lighter cutlery for business class passengers.  Overall the savings so far have been worth more than £20m.

UK retail giant J Sainsbury has been running a similar campaign for many years and one example underlines the idea again of small suggestions making a difference.  An employee noted that when the company ran a campaign selling mangoes at a discount the packaging they came in only accommodated five mangoes. By repackaging the fruit into boxes of six the company was able to save around £60,000 during the life of the campaign.

But whilst one-off suggestions can help there is more traction to be found in focusing over a sustained period of time, driving down a particular target.  Again there are many examples to underline this – not least the quality miracle’ which Japanese industry first worked during the 1970s.  Here a combination of mobilising employees to contribute small suggestions – kaizen – and the rigorous focus on quality enabled defect rates to move from percentages to eventually being measured in parts per million.  Similar stories relate to areas like plant maintenance and machine availability or the relentless drive to reduce the time taken to set up large pieces of equipment like body presses in the car industry.  A campaign spread over many years led to this time coming down from days to hours and eventually to single minutes – and the principle have been equally well applied in different fields such as operating theatre set up or turnaround times at airports.

Studies of creativity show that when you ask a group of people to work on a problem you generate not only more volume of ideas but also more variety – more potential avenues to explore for solutions.  In these days of crowdsourcing we have the ability to spread the net widely and to source ideas and to build on other people’s ideas.  So any organization needs to reflect on the potential it has within its workforce – and to ask whether or not it is doing enough to tap into that rich well of potential innovation.

These days the tools to enable collaborative incremental innovation are much more powerful than the simple suggestion box.  Collaboration platforms abound and have many features which maximise the potential for crossover, idea enhancement and knowledge capture.  But underneath they depend on the same core principles – a commitment to sustained incremental innovation as a way of gaining advantage and an enabling culture to engage employees as a key source of innovation.  Research on successful continuous improvement regularly confirms the kind of capabilities which need to be present; these include: