Removing the disincentives to innovate 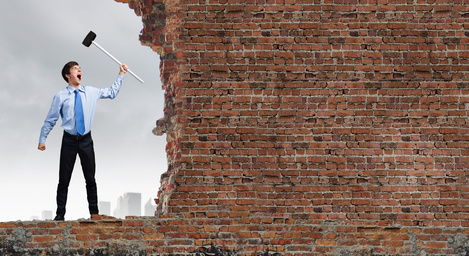 It is common to see on the homepage of innovation management platforms a message from the CEO, or other senior leader in the company, endorsing the tool and encouraging employees to participate and share their ideas. This is a nice message and helps to demonstrate a purpose - however, it cannot be mistaken for permission to participate, which is sometimes the goal. The permission to participate in reality does not sit with the CEO, but instead with middle management, who are the ones really in control of resources. This layer of authority can pose a significant challenge to progress.

The CEO may have innovation and collaboration as a top strategic goal, but middle management may see the world differently - perhaps they have not had the time to see the relevance of innovation to their business unit, nor been given the tools and knowledge to deal with it. For them, the goal is hitting targets and keeping resources focused on the job at hand. Innovation managers who recognize this take steps to educate and inform. Mike Hatrick at Swisslog, a leading logistics company, developed a training program to coincide with the rollout of the new innovation platform. Mike personally travelled to company locations around the globe to conduct seminars on the vision, purpose, and practical aspects of the initiative.

In the book Unleashing Innovation, by Nancy Tennant Snyder and Deborah Duarte, the authors explain how Whirlpool created an I-Mentor program designed to build innovation advocates that would develop ties within the business, and strengthen the focus on innovation as a company objective. They realized that innovation could not be left to a select few, they needed everybody in the organization thinking about the challenges and contributing their knowledge:

The I-Mentor program was instrumental in driving a culture of innovation across the business. To navigate the challenge of middle management, education and dissemination of knowledge is essential - a structured program to inform and reinforce the message is key. Whirlpool had the luxury of a major initiative which provided the resources to do this on a large scale and at rapid pace, but as Mike Hatrick has shown, it can also be led by the charge of a single innovation champion.

Participating in idea campaigns is voluntary, employees don’t have to read the invitation email, and they don’t have to take the time to contribute. In most cases it is desirable to take part, but the first hurdle to overcome is: do my superiors and peers think I should be spending time on something like this? If this is unclear, how can people be influenced to take part?

An example from Scott E. Page, University of Michigan, provides a useful analogy. What makes people stand up and applaud at a show? Several factors are important, the quality of the performance is of course pivotal. Standing ovations tend to happen spontaneously, the entire audience begins to rise like a Mexican Wave. Page says that the viewpoint of where you are sitting is important:

The celebrities sitting in the front row are a small group of people with a large influence over the behavior of others. Companies work in a similar way, there are key figures throughout the organization, not necessarily those in top ranking positions, who have frequent and high visibility. Seek out those individuals and aim to bring them on side with your initiative. If this small group is engaged, it could lead to a tipping point as others follow their behavior. We have seen companies immediately jump into education for the masses, to convince every individual of the importance of taking part - while this is certainly a good thing, it might be more productive to focus on bringing the celebrities on board, and help to create a tipping point in acceptance of the program.

Open to sharing my IP

An engineering company told us of the challenge in getting high quality detailed ideas from their engineers. The reason they found is that the engineers had a great sense of pride in their patents - they were also rewarded for having patents - they are driven by having unique ideas. Engineers would hide their ideas away in a notebook rather than share them openly in a company-wide system. The innovation team had to convince them that putting an idea into the system means a documented time stamp, with author, location, department, and the data is protected and backed-up. The idea is safer and more tightly linked to the original author inside the system than written down in a notebook.

This can be a serious obstacle to overcome in some cultures. Communication should be clearly provided about the reassurances around ideas submitted. In most cases ideas are only fragments of a solution, and rarely a demonstrable piece of intellectual property. But if this is the case it's recommended to include a patent workflow into the platform to quickly handle those types of ideas. Several HYPE clients have this process integrated, allowing ideas to be flagged and pushed through a separate series of steps which involve the company patent department.

The barriers mentioned so far are largely process and cultural in nature, but there is one consistent barrier that cames up more frequently than any other: single-sign-on access to the tool. SSO is a simple process to enable, and is typically done in hosted and installed situations, but often the challenge remains in corporate IT departments, where they lack the resources, know-how, or motivation to assist. Sometimes the innovation manager is faced with the choice of getting the platform out on time without the full support of IT, or delay launch until IT can provide the necessary assistance - as one client told me:

“Biggest barrier? Single-sign-on – to reduce the barrier for users to get on board. At the time there was so much IT change going on, that it was hard to get it sorted. In hindsight I would probably have delayed the whole rollout by a year just to ensure this was sorted.” - Mike Hatrick, Innovation Manager at Swisslog

Similarly another client in a different industry also mentioned this:

“Not having SSO in place yet - this is the biggest barrier to adoption. Users love the tool, they love the spirit of it, but they don’t have time to find their credentials every time. Either quickly log me into the tool during a coffee break, or I probably won’t bother.” Innovation Manager at Aviation Company

Today many companies are deploying social business platforms to replace legacy intranets, file sharing repositories, and discussion forums. If implemented well these social tools can be an excellent hub for activity. It’s important that your innovation platform integrates with them, so that users can seamlessly move between the two systems. Deep integrations can provide significant benefits, and reduce barriers to entry. For example vendors like HYPE (probably others too) are able to display widgets within the social tool which display real-time data from campaigns, and even allow the setup and launch of campaigns natively within the social tool, facilitating data synchronization back and forth. This means users can choose to participate from either side - and innovation managers can still utilize the full benefits of evaluations, analytics, reporting, and pipeline management.

So while there is a lot of focus on incentives and motivation to participate in online platforms, big corporates should still take a good look at the disincentives and remove as many of those barriers as possible.