Harvesting Abundance in the Sharing Economy

The amateurs are coming! Are you ready?

Over time, we have seen transitions in how goods and services are supplied to buyers. It used to be that you were limited to what you could buy in your local village. With the rise of industrialization and subsequent globalization, choices increased and costs went down. But inevitably, industries saw varying degrees of concentration of market share amongst a few mega firms. With the unfortunate - but understandable - consequence of reducing choices as firms focus on what sells  broadly.

More recently, we're seeing the emergence of a new way to secure the goods, services, and even ideas: what Jeremiah Owyang calls the 'collaborative economy', and others refer to as the 'sharing economy'. People who have private excess capacity, and are making it available to others who want to purchase it. It's real, it's early, and here's how Jeremiah describes the changing state of affairs:

Each of the above examples is a case where the supply was always "there". Already-purchased items that we no longer want? We've got homes full of those. Excess time on weekends to help move? Yup, we often have slack in our Saturday/Sunday schedules. For driving, think about Lyft...we car owners have excess seating capacity on our drives. Homes with available lodging capacity? Sure, there are multiple times we're traveling during the year. Available funds sitting in savings or checking accounts? You just might have some of that too.

Part-timers (amateurs!) are adding to the supply of goods, services and ideas. What does this mean for established industries?

Applying macro economics, we've operated under a fairly stable supply-demand equilibrium for decades. In industry after industry, there are demand and supply curves that companies would battle to move up or down in their favor.

The expansion of supply through part-timers will move the supply chain out. This means increased quantities of something (Q1 → Q2) and reduced prices (P1 → P2).

This is both liberating, and ultimately disruptive. In terms of liberation, it expands the choices available to people for things. Can't afford that expensive hotel in central Paris? Rent space for less than $75/day on Airbnb. Have an idea for a cool new toy, but no access to toy manufacturers or bank loans? Head over to Kickstarter for a new source of capital.

The flip side of liberating for buyers can be disrupting for incumbents. The increased supply expands the market,

enabling those priced out of a market to enter into it. But these options aren't just for new buyers; some existing buyers will switch to the new offering. This is disruption, as Clay Christensen describes it. People choosing a lower performance option to that satisfies their existing jobs-to-be-done. And let's add venture capitalist Paul Graham's perspective on new supply options:

Don't be discouraged if what you produce initially is something other people dismiss as a toy. In fact, that's a good sign.

The new ways of harvesting abundance *are* amateur and lacking in the evolved sense of performance we've come to expect. And yet they're gaining traction and delivering value to expanded markets.

Two factors are vital in the uptake of these new collaborative economy models:

Both are important, but one - technology - is "easier" than the other.

How would we have eBay without the web? Kiva without a payment mechanism? Uber without mobile and GPS technology?

Our limited access to information was a structural constraint on supply for a given market. Sort of like a dam holding back water. It wasn't that people didn't have excess capacity (goods, services, ideas). There was just no good way to find it. Thus we accessed what we could source within our immediate environment. 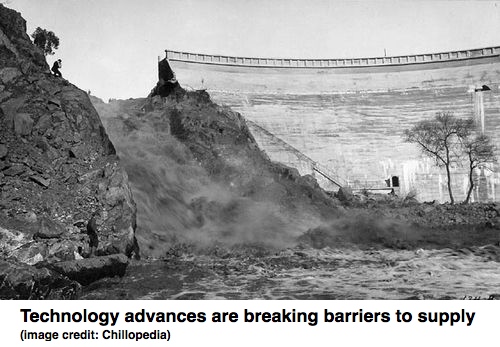 But like a dam bursting, there can be some unintended consequences. As we've seen time and again, technology changes the contours of markets, shifting the basis of supply and demand. With the predictable reaction of incumbents:

Those incumbents are fighting potential threats to their markets, not new competitors who are supplanting them. Because it's one thing to have technology that can surface excess capacity. It's another for people to (i) share that capacity; and (ii) purchase it. Which brings us to...

The change that is fueling increases in the collaborative economy is a willingness both to supply and to purchase the excess capacity we amateurs have. While we've long participated in garage sales and flea markets, the new behavior extends these activities globally. With anyone (not just family, friends, neighbors). For a much broader range of items.

But the sharing economy is still a nascent phenomenon. I expect it will follow the familiar innovation diffusion curve: 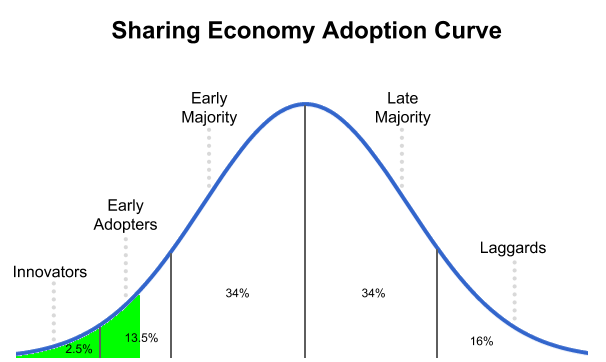 Innovators: These people exhibit a high level of the possibility effect. That is, they give disproportionate credit to the possible benefits. And they're happy to experiment with anything that possibly could improve outcomes for their jobs-to-be-done.

Early Adopters: This group similarly possesses high levels of the possibility effect. They differ from Innovators in that they only want to try inventions which they feel have a *good* chance to improve on a job-to-be-done. This is a more rigorous analysis than what Innovators will undertake. But they do enjoy the psychological aspect of being *early*, before the broader market.

Early Majority: This is the critical segment to conquer. Relative to the Early Adopter, these folks are regular pragmatists. The new thing must have a proven basis for improving a job-to-be-done that they have. They're not interested in experimenting with potential solutions; they want what works.

We're in the Early Adopter phase of the collaborative economy, as seen in these stats:

These September 2014 tweets about Airbnb, perhaps one of the most advanced players in the collaborative economy, speak to the current state of adoption:

There's an obvious 'Crossing the Chasm' aspect to getting uptake by the Early Majority. This segment will be pragmatic, and needs a key offering in a single product class to "open up" the desire to engage more fully in the collaborative economy. Key aspects of getting that adoption:

Paul Hobcraft has a smart take on what's needed to get an innovation adopted as well: relative advantage, compatibility with needs, (lack of) complexity, trialability, observability.

Taking these various factors into consideration, the dynamics of change are in place; it is a matter of time before many of us start using providers in the collaborative economy. The price, long-tail variety and convenience are compelling.

But there is an area where uptake has been getting stronger...

I'm in a fortunate position to know how much "harvesting abundance" is taking hold in companies across the globe. You'd be impressed with the caliber of companies who see incredible value in the abundance of cognitive diversity and seek to better utilize it.

Similar to Airbnb, Kickstarter, Lyft, Quirky, etc., people have spare capacity in terms of their ideas, insight and experiences. They are at a point where they are willing, and are even eager, to provide these cognitive assets to companies. 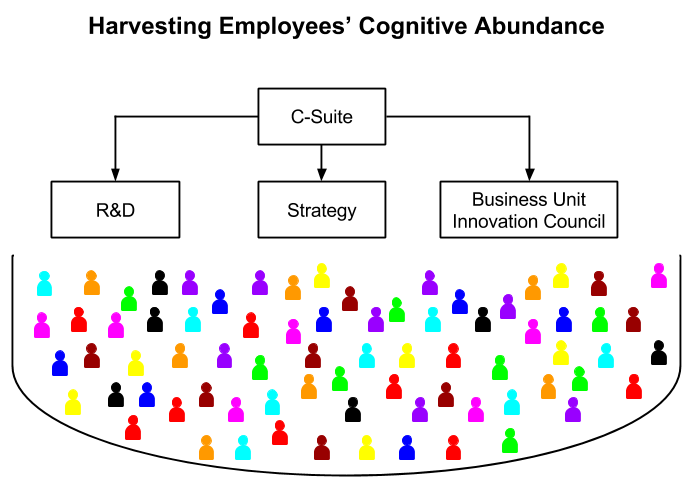 Historically, corporate leaders have relied on a select few to provide their ideas: R&D, strategy groups, elite teams at the business unit level. These providers of innovation aren't going away, similar to the way hotels, banks, auto-makers, public transit and large-scale manufacturers aren't going away. But they're making room for new sources of value that they previously didn't pay attention to, and didn't seek to engage. They're seeking that abundance.

And unlike hoteliers and the taxi industry vs. Airbnb and Uber/Lyft, the R&D, strategy groups and business unit innovation councils aren't lobbying to stop it...

The sharing economy is about harvesting abundance, with technologies and norms changing to make it possible. It's happening faster in the relatively "free" internal corporate environment, and expect to see behaviors change more broadly over time in the consumer world.