Innovation is easy. Or rather, certain kinds of innovation are. Faced with the challenge of improving a product or service in the marketplace shouldn’t present too much of a problem for organizations with capabilities in managing and deploying their knowledge base. Using good market research to keep a finger on the pulse of customer needs and desires should give a clear steer about what to change as they progress along a well-established pathway. And having the technical resources in R&D, software engineering or product development should mean your organization can rise to the challenge of tweaking an offering whose core nature is already well-understood. 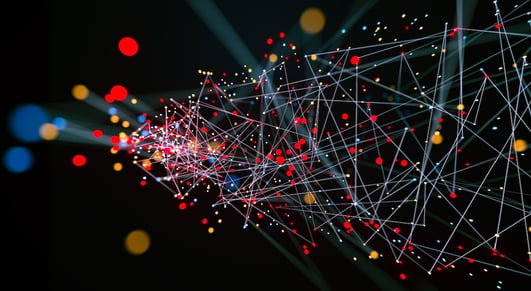 Welcome to the world of incremental innovation – essentially a space in which smart established organizations can leverage continuing advantage. Exploiting knowledge and the networks across which it flows should be easy, and the evidence strongly supports this. Think about companies like Procter and Gamble or Unilever, systematically using and re-using their rich knowledge bank to constantly update thousands of products on supermarket shelves. Or IBM and Oracle, working closely with users to continuously upgrade their services. And then think about the difficulties if you are a challenger – all the learning you have to do on technical and market paths just to get to a similar position. Not surprisingly it’s rare for incumbents to stumble unless – like Samsung with the Galaxy 7 – you get tripped up by something unexpected.

The same story applies to process innovation – all the evidence points to the strong value of incrementally improving processes, increasing yields and efficiencies, tweaking the model to deliver higher quality, doing the same thing for less. It’s often the Cinderella of the piece but behind the scenes systematic process improvement can be the source of long-term growth. Edison may have brought the light-bulb to market but its success as an innovation involved decades of continuous incremental improvement. As James Bright showed in his famous study, the costs fell by over 80% and the quality improved dramatically between 1880 and 1896 following Edison and Swann’s patents as a result of multiple small but cumulative innovations. The same pattern can be seen in industries as far apart as microchips, steelmaking, petroleum refining or rayon spinning – systematic incremental improvement makes the biggest difference over time.

We know that there is more to the innovation game than just doing what we do a little better. It may be a safe space in terms of moving along established pathways but there’s a high risk that someone else is building a motorway a short distance away and we are about to be surprised, and very possibly disrupted by a radical new idea.

There’s plenty of ways this can happen – new technology, opening up new markets, new business models – but the outcome is the same. So any smart organization needs to invest in exploration – doing research into markets and technologies that it doesn’t know so much about – yet. This is where we bet on the future and we’ve learned some useful lessons about how to manage this process. We can’t guarantee success but we can build a portfolio of projects which allow us to build our knowledge base about markets and technologies for the future alongside the systematic exploitation of what we already know.

We can think of these two modes of working in terms of a map of innovation space. Essentially we are dealing with the known or easily knowable kind of information in the incremental case and with the unknown – complicated but still potentially knowable – in the case of radical innovation. 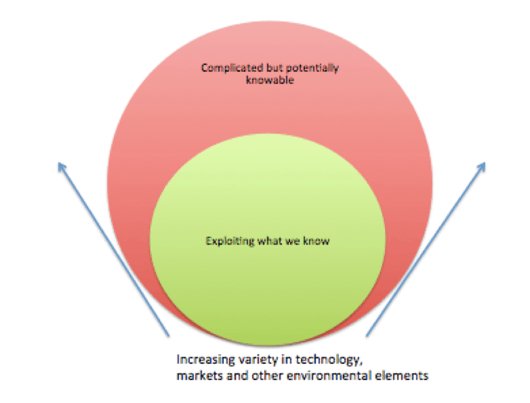 So far so good. But the world is full of innovation triggers and it’s impossible to keep track of all of them. There are many more pieces in the game than we can possibly work with – so we put a frame around the ones we understand and try and work within that space. But there’s a risk that something is going to emerge from that wider world and it could have a big impact on us. Think about low cost air travel, Uber, Airbnb - all disruptive not because they involved radical innovation but because they recombined elements in new ways, or new games emerged.

If we map this on our model it’s essentially complex space – unknown and potentially knowable only with some very different strategies. Complexity emerges when there are many elements in an environment and they interact with each other so the outcome of a given situation can't be predicted in linear fashion. Instead there is a degree of ‘co-evolution’ out of which something new emerges.

It sits on the edge of chaos, where things are totally unpredictable and where there is no chance of us learning or finding any patterns. But complex conditions are potentially knowable – they have a deeper structure and if we work with some of the heuristics about playing in that space we might be able to develop approaches. 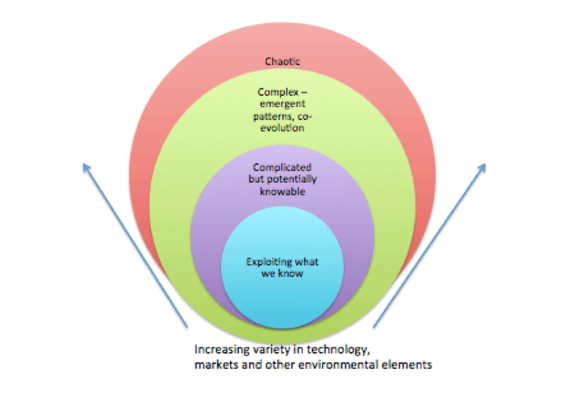 Think about a children’s bouncy castle – great fun as a play object but also a helpful reminder of some of the characteristics of complex systems. Put one child on it to bounce and he/she will have fun; more important, an understanding of ballistics and the physics of elasticity should help us predict more or less where our child will end up. Put another child on and we’re in the territory of some fiendishly complex simultaneous equations but we might still have a chance of working out who ends up where. Put ten children on – and were in the world of complexity. Apparently random behaviour and effects, each bounce influencing another so that all we see is a noisy chaotic picture of kids having fun.

Except that there are certain patterns. It's not entirely chaotic, there are moments when things happen which lead to a stable structure emerging. If two children fall into the same space they create a deep dip in the castle – and then the chances are that other kids will slip and slide and fall into it. Eventually there is an equilibrium point with a pile of kids on top of each other – and, until they start bouncing again, a stable state. Complexity theory teaches us some useful stuff about feedback and amplification, working around emergent points and trends. So if we are going to try and work in this area of innovation space then we need some very different strategies.

So working in this third zone is possible – and arguably essential if we want to avoid surprises. But it requires a very different approach, much more like the way entrepreneurs approach new opportunities. Starting with a ‘master plan’ is not a helpful recipe here – instead the whole idea is to manage an experimental learning process, hunting for patterns and then amplifying and reinforcing them when they begin to emerge. Lean start-up, agile – doesn't matter what you call it, the underlying approach is the same. Think and behave like an entrepreneur.

There are times when innovation is like this – what James Utterback and William Abernathy call ‘the fluid state’. Think about the way new-to-the-world innovations often emerge. They don't appear, perfectly formed, like Venus rising from the ocean in Botticelli’s famous painting. Instead they are the product of a probe and learn process, gradually emerging through a pattern of co-evolution amongst different elements. Only gradually does a ‘dominant design’ emerge – but when it does it lays down the trajectory along which the innovation will develop for years to come. 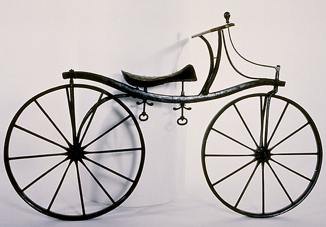 Go back to the bicycle – it's pretty ubiquitous today but wasn’t always with us. Around the turn of the 19th century different elements began to converge – the ability to make metal products in volume and to reasonable quality, the underlying science behind gears and power transmission, the growing demand for personal transportation as an alternative to horses. In 1817 Baron Karl von Drais invented his ‘Laufmaschine’ (running machine) which was the first in a long series of experiments, probing and learning in this soup of innovation possibilities. For the next seventy years all sorts of variations on this theme – single and multiple wheels, brakes, gears, different seating configurations – appeared as ideas were borrowed, adapted, redeployed and sometimes just stolen and applied wholesale. It wasn’t until 1885 that John Kemp Starley put them all together into something we still recognise – his Safety Bicycle had two wheels of similar size, a diamond shaped frame and a chain and pedal drive. The dominant design had finally bubbled to the surface of the innovation soup. 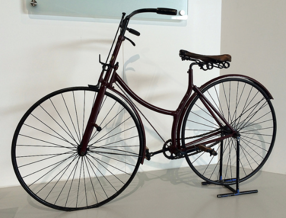 Working with complexity isn’t easy for large organizations – the kind of people who are comfortable with working in this open, risk-taking experimental fashion are not a good fit with the mainstream. So finding ways of using them is more than just setting up venture teams, scouts, or whatever. We’ve also got to address the challenge of bridging them back into the mainstream – today’s edge of chaos experiment might be tomorrow’s core business, allowing us to exploit incremental innovation and harvest your hard-won knowledge investments. But that’ll only happen if we find ways of linking the two worlds – and that’s often easier said than done. We need to learn to be ‘ambidextrous’ – capable of two parallel and complementary ways of organizing and managing innovation.