As an innovation manager you have the enviable task of stimulating creativity across the organization, and channeling it towards the strategic goals of the company - ultimately creating breakthrough innovations. Lots of techniques exist for small-group creativity workshops, but stimulating creativity in online environments is relatively new. Let’s look at some advice and see how it translates to this world.

The importance of radical seed ideas

In 2012, psychologist Simone Ritter - of Radboud University Nijmegen - and her team asked some students to prepare a breakfast sandwich with butter and chocolate (it’s the Netherlands - they like that apparently). Half the group made the sandwich in the familiar textbook way, and the other half made it following some unusual instructions. Then everybody had two minutes to generate uses for a brick (that old classic), and another two minutes to generate as many answers to the question: “what makes sound?”.

What they found is that those students who followed the unusual instructions for making the conventional sandwich had more types of answers and thus scored higher on the cognitive flexibility test. It’s an isolated experiment, but it taps into something quite useful - that priming the cognitive experience with non-linear, or non-standard thoughts is a great way to stimulate new ideas. 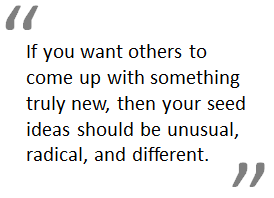 When running online campaigns for idea generation, we already know the importance of seed ideas. They help to set the expectation levels, and they give confidence that others are already engaged. But what about the radical nature of those ideas? If you want others to come up with something truly new, then your seed ideas should be unusual, radical, and different. Don’t just post another incremental safe suggestion - which is often typical of seed ideas.

Another example that we’ve seen work well, is to create an inspiration space in the tool - encourage contributors to take a look before submitting ideas to the campaign. The inspiration space is filled with examples of breakthrough and radical innovations, mostly in the form of pictures, videos, links, but also some short articles. The content can help to prime contributors before submitting ideas to a challenge. With the combination of inspirational and unusual examples, and radical seed ideas, your submissions might jump up a notch on the ‘ah ha!’ scale.

Thinking in the future state

In a similar study, psychologist Nina Liberman - of Tel Aviv University - asked participants to visualize themselves one day or one year in the future. Then the participants were given a series of problems to solve. You can guess the results, right?

“Those who pictured themselves in the distant future solved significantly more problems than those who simply imagined the following day.”

This is important for innovation managers running breakthrough campaigns. It’s not like cost saving or process improvements, where the answer is known, it just needs to be found. Radical innovation means bringing something new to the fore - combining existing pieces perhaps, or creating an entirely new concept. It’s important that the campaign description and visual branding place the participants minds in the future, not in the present - there is a need to stop thinking how the business thinks today, and think how the business needs to think in many years ahead. 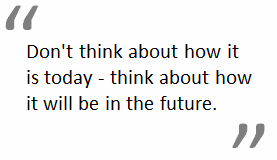 Not easy - it requires some careful crafting of wording around communications. Often it is easy to spot a lack of forward thinking though, with classic statements like “we need to remain competitive, grow the business, and we see innovation as the way to do that”. It still talks about the present state, and the present way of working. Go for the moonshot: “in five years time we want to be building products people have never imagined before, from materials we have no clue about - and offering services that simply don’t exist today”. Don't think about how it is today - think about how it will be in the future.

Evangelia Chrysikou, psychologist from the University of Pennsylvania, writes in her article Your Fertile Brain At Work, that creativity was long thought of as a gift that some individuals possessed, and many others didn’t. She argues that idea generation benefits significantly from a mental state known as hypofrontality - where the brain is in a more relaxed mode, and has fewer restrictions on your thought and behavior. This is borne out by experiments measuring electrical activity in the brains of people who were generating new ideas, compared to those engaged in a task that requires cognitive control and focused attention, such as solving a math problem.

“Idea generation is the first important stage of the creative process. To come up with new ideas for achieving a goal, you need, roughly speaking, an open mind - that is, one guided by minimal rules and constraints.”

What’s so interesting about this list, is how well they map to online idea campaigns. Participating in a campaign which is outside of your business unit is ideal for stepping out of your comfort zone, and challenging yourself in a non-routine way. Campaigns are also a fun and engaging activity, which is not part of the day job for most people - the competitive edge, and potentially having your idea selected can be a lot of fun. And the most beneficial consequence of campaigns is that you pull together outsiders, who bring a different perspective, and build upon each others’ ideas.

As a campaign manager, encourage diversity, try to bring in more voices from areas of the business which normally would not be involved. Also communicate that it only takes five minutes to log-in and read an idea - the bar for entry is very low - this can be a coffee break activity for many, but the value is still high when done at scale. 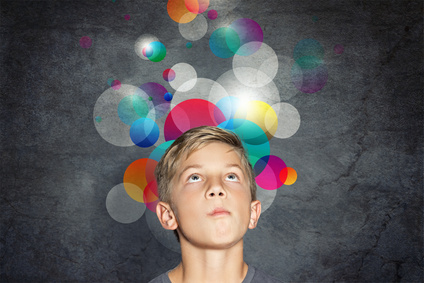 Robert Epstein, senior research psychologist at the American Institute for Behavioral Research and Technology, puts forward four core competencies for creative expression: Capturing, Surrounding, Challenging, and Broadening. Each one of these can be nicely facilitated by online idea campaigns:

At the individual level, an online platform allows users to capture ideas via their mobile, take pictures, save them as drafts, and come back to them later. I’ve heard many objectives - particularly from engineers - who say that they worry about losing their patent rights by adding ideas into the system, but quite the opposite is true: hiding your idea in a notebook is the biggest risk, but documenting it with a timestamp and author, in a backed-up repository, establishes prior ownership, and an excellent ‘paper trail’.

At the organizational level, capturing knowledge via ideas is incredibly important. Even if you run the ideation sessions outside of the tool, in a brainstorming workshop for example, you should still document them online. Encourage people to keep ideating in the same ways, but just ask that they fire up a campaign and load in the ideas and comments when done. It’s easy, and adds to the searchable repository of knowledge within the company - you never know when somebody might be searching in one system, and a highly relevant idea pops up from another, via a search integration. Existing ideas can also always be moved into new campaigns and put to good use.

As mentioned previously, inspiration spaces act as stimulants for campaigns - places where stories and examples can be placed to help generate fresh thinking. By also opening up campaigns to wider audiences, you allow people to move between different fields - not just their own area of expertise. This can help to diversify thought, and as Epstein says, make it more interesting.

“...giving ourselves tough problems to solve. In tough situations, multiple behaviors compete with one another, and their interconnections create new behaviors and ideas.” 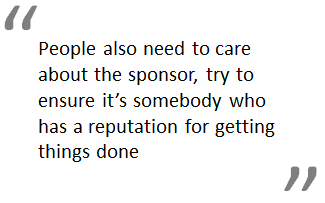 By their very nature campaigns pose a challenge to the audience. You want to make these challenges meaningful - and have a sponsor that truly cares about getting an outcome which can be implemented. People also need to care about the sponsor, try to ensure it’s somebody who has a reputation for getting things done, or is well liked throughout the company.

Leaderboards, competitions, and prizes can all help to boost the challenge nature. But ultimately you’ll want to appeal to the intrinsic motivations of people rather than extrinsic, through empathy for the problem and the need for a solution. Once you put extrinsic rewards in, it can be hard to take them out again.

“The more diverse your knowledge, the more interesting the interconnections - so you can boost your creativity simply by learning interesting new things.”

Supporting material can take time to gather and compile, but it’s worth doing for campaigns. Don’t just throw up a question, invite everybody, and watch the stats. Try to create a learning experience - provide background material, links to videos, examples of how others have solved similar problems. People love to learn for free and in their own time, and campaigns can offer both formal materials, plus the exposure to knowledge from others via ideas and comments.

Company-wide campaigns are a broadening exercise for many employees - it’s outside of their day to day job, requires relatively low commitment, and can be immensely rewarding. When a campaign really takes off, it can be an exciting online space, where thousands of people from across the globe participate. The more it takes off, the more interconnections can take place, and thus more creativity for your business.