What You Need to Know Before Creating an Innovation Culture

Raise your hand if you don't want an innovation culture in your organization.

Ask this question in any gathering of managers, and it's a fair bet you won't be seeing a sea of arms waving in the air. Who'd want the kind of organization in which people went around with their heads down and their brains running in neutral? Who'd like to work in the sort of place where people were afraid to try things out or to experiment? Who'd stay with the kind of organization that wanted them only to do as told and not to challenge or play?

If we're serious about wanting an innovation culture, then we need to be clear about two things:

Let's start with the first question, and it's a big one: What is an innovation culture? But before we look at innovation culture specifically, it's worth understanding what any kind of culture is. One useful starting point comes from the work of former MIT Sloan School of Management professor Edgar Schein, one of the leading experts in organizational culture. According to Schein, culture is, at its simplest, a shared pattern of beliefs which shape our behavior – it's "the way we do things around here." 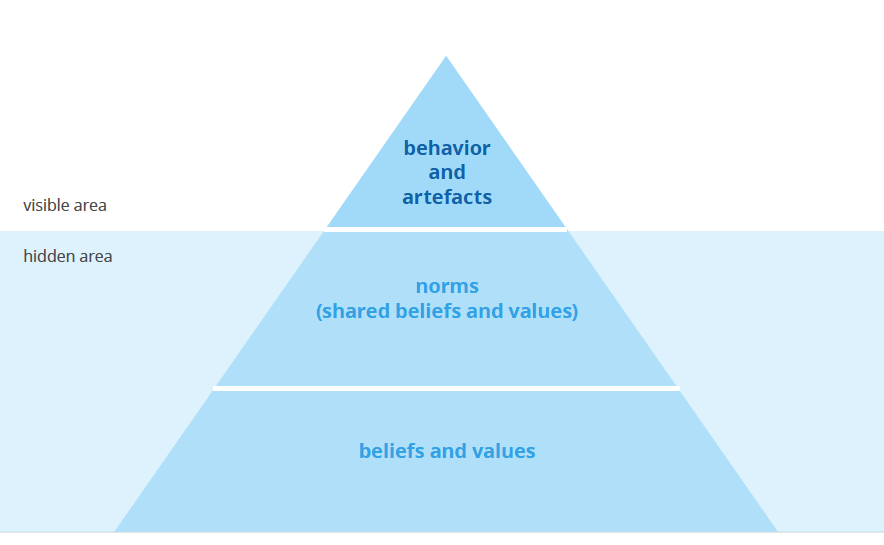 Schein's model suggests that this starts with our own beliefs and values which shape how we behave. And that's all we need if we are solitary hermits. But since we interact with others, we come to a pattern of shared beliefs and values leading to commonly agreed on behavioral norms. These become practiced and refined so that eventually they are "the way we do things around here." Behaving in this pattern means we create "artifacts" that reinforce and express our culture. For example, in the office, there are patterns of behavior reinforced by policies, procedures, processes, physical layouts, etc.

It's worth thinking about this. We know a great deal about ancient Egyptian life without having met a single ancient Egyptian. Instead, we can reconstruct the pattern of shared values, behaviors, and beliefs from the artifacts found in tombs and pyramids.

So, culture is a pattern of shared values and beliefs leading to shared behaviors. And an innovation culture is just that: the kind of beliefs and behaviors we'd expect to see in a place where people believed certain things about innovation are important.

Learning from the innovation greats

What are the kinds of things which we believe are valuable and which we might use to shape our behaviors? One place to look might be to study great innovators and see what they would say. There's no shortage of pithy quotes to help us, for example:

But we should be careful not to take all of this "wisdom" at face value. For example, would we be happy following Nikola Tesla's beliefs and behavior patterns? He was undoubtedly a great innovator (about the only thing he didn't have a crack at was the vehicle which bears his name!). 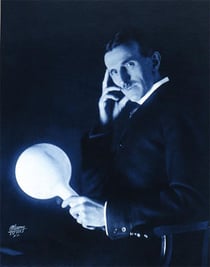 But he was also slightly odd. For example, he was obsessed with the number three, washing his hands three times in a row and walking around a building three times before entering.

Tesla is typical of many great individual innovators. As Melissa Schilling eloquently demonstrates in her book, "Quirky: The Remarkable Story of the Traits, Foibles, and Genius of Breakthrough Innovators Who Changed the World," they are often a bit eccentric.

To counteract this individual quirky effect, we could look at pairs and trios of innovators – and again we have plenty of examples. Procter and Gamble, Hewlett and Packard, Jobs and Wozniak, Gates and Allen, Brin and Page. What's interesting here is that it's often the differences in the way these individuals believe and behave which gives rise to the innovative culture in their organizations. The way they spark off each other helps create the kind of values and behaviors which work.

We can see this, even more, when we look at high performing innovation teams. There's been a lot of research in this space, and a key message emerges: diversity matters.

Meredith Belbin's famous studies of group roles, which effectively capture behaviors contributed by different individuals, show that "Apollo teams," made up of many similar brilliant minds, are not very good. The best performance comes from a mix of varied people. And we can see this particularly well if we look at organizations in the creative industries where innovation is a crucial survival factor. It's not just great people coming up with bright ideas; it's also a battlefield of arguments about shaping those ideas into something which works.

Conflict and argument aren't bad – the key is being able to work with them. Pixar, the studio which brought you "Toy Story," among other award-winning animated films, is famous for this. As Ed Catmull explains in his excellent book, "Creativity, Inc., Overcoming the Unseen Forces That Stand in the Way of True Inspiration," success isn't an accident; it comes down to finding a way of working, which is challenging and stretching.

So, an "innovation culture" involves core beliefs and behaviors that are not just about being prepared to suggest and create but also about articulating and enabling constructive conflict as well as adapting and pivoting ideas in the interests and direction of better ones.

This also brings in the idea of leadership – someone who helps reinforce and guide the culture but who also gives it a sense of overall direction. In the book, "The Illusion of Leadership," author Piers Ibbotson makes the point that a great theater or film director doesn't impose his or her ideas but instead works with the situation and the emerging ideas. Their role is to channel and shape them.

We can see this in famous examples of innovation teams, which have accomplished extraordinary things, such as the original Skunk Works producing a jet fighter from zero in six months, or the fascinating exploits of the pioneers of the car component industry, the 'Barn Gang' under Boss Kettering. Prototyping and fast failure are not new ideas – they're deeply rooted in this kind of experience.

There is no one-size-fits-all solution

Recipes of this sort are powerful in the small, focused teams in a theater or film – or indeed in the startup where there are high uncertainty and a need for creativity and a strong sense of shared purpose. But what about the growing and larger organizations? What about the public sector where the core tasks are about reproducibility and consistency? What about maintaining levels of service and quality? How do we build an innovation culture here?

The answer is not to look for a one-size-fits-all solution. Trying to turn the whole organization into a startup is likely to bring it crashing down. Equally, running it as a business-as-usual supertanker runs the risk of crashing slowly but heavily into the rocks because of an inability to turn fast enough.

Instead, it's about looking to identify and build sub-cultures – coherent and complementary ways of working with the innovation challenge. A handful of the top-level beliefs about the importance of innovation can wrap around everyone. But there's scope for variations on the theme as the organization confronts different tasks. It's a little like tribes uniting behind a leader, pooling their distinct strengths and skills to create a powerful country.

For example, the organization might have a mainstream R&D group, but it also recognizes the need to think outside the box and explore potentially disruptive innovations via an entrepreneur lab. It might have core innovation routes to market but also sees the need for a corporate venture unit to examine various ways of exploiting their knowledge base. At its heart it might be running a collaboration platform, enabling high involvement across its workforce, aimed at delivering a steady stream of continuous improvements in its products, processes, and services. And it might be exploring new ways of working with users, deploying crowdsourcing and other tools as it seeks to open itself up to a changing innovation game.

All of these, and others, will require a commitment to innovation, but the kinds of behavior and underlying beliefs will vary considerably. It's not a case of one being better than the other but rather the need for diversity in approach to deal with a complex external challenge.

A spectrum of innovation cultures

This idea of diverse parts of the organization innovating in different ways isn't a new insight. Way back in the 1960s, Tom Burns and George Stalker carried out a seminal piece of research looking at cultures for innovation. They examined disparate environments and found that there was innovation in all of them – but it took different forms and involved various behaviors and beliefs. Their work identified a spectrum of innovation cultures with two poles.

At one end of the spectrum were "mechanistic cultures," concerned with incremental innovation, and doing what we do but better. Typical of this kind of culture would be the production line or call center where there is certainly scope for innovation but where we don't want a radical challenge. (Would you be happy if the factory worker helping produce the drugs which you take for your health suddenly decided to approach his or her job with the mindset of a disruptive innovator?!)

At the other end of the spectrum we'd find the R&D lab, or the startup boot-camp – a place where it is legitimate to take big risks, to challenge and break taboos, to disrupt, and to accept a high level of failure as part of a learning journey.

Smart organizations today try to create different vehicles for the innovation journey, building complementary sub-cultures which work together to deliver the context in which ideas, big and small, incremental and radical, can combine to create value. It's the same pattern in both the private and public sector – mobilizing people in diverse ways to contribute.

That helps a lot with our first question of "What is Innovation Culture?" – but we still must work out an answer to the second: "How do we create an innovation culture?" Read the blog post here.