How to Embrace These 4 Leadership Paradoxes

Incremental or radical? Structured or unstructured? People or processes? If there is one thing an innovation management theory is never in short supply of, it’s dilemmas like these: paradoxes of leadership.

“Managed or unmanaged” is probably my favourite of the bunch, with countless books, blogs, articles, and podcasts dedicated to describing the ultimate innovation leader and their role – active or passive - in the process.But what makes a good leader anyway? Is it training the "leadership muscle"? Discipline & routines? Mind-set? Academics suggest it’s all about embracing contrast or as professors David Waldman and David Bowen, authors of new research in the field call them, paradoxes.

In “Learning to be a paradox-savvy leader”, the research duo describes four paradoxes that are increasingly relevant to leaders, the challenges in approaching them, and the traps that can keep leadership and management from conceiving and implementing a desirable resolution.

Below are some highlights from Waldman & Bowen’s work.

The Four Paradoxes to Know

Unpredictable, unstable, non-linear, fast-paced. These are the staples of 21st century innovation and collaboration. As the elements determining an organization’s effectiveness increase in number and type, paradoxes like maintaining control, while letting go of control and stressing continuity, while also stressing change, are becoming more relevant to leaders and their effectiveness.

According to Waldman & Bowen, paradoxes involve contradictory yet interrelated components that exist simultaneously and persist over time. They also come in two flavours.

1. Maintaining a strong sense of self while simultaneously maintaining humility

4. Pursuing corporate social responsibility (CSR) for the strategic purpose of increasing profits while simultaneously pursuing CSR for morally based purposes

The first set of paradoxes, those inherent to leadership, refer to how individuals relate to their context and their followers. Think of former “Daily Show” host Jon Stewart and his ability to bring others up to his level, often without them even knowing. An ultimate example of maintaining a strong sense of self while simultaneously maintaining humility. When it comes to maintaining control while letting go of control, Sharon Price John, CEO of Build-A-Bear Workshop, is another leader to look up to. While managing the turnaround of her failing toy company, Price excelled at balancing the two extremes.

The second set of paradoxes (those inherent to organizations), refer to the dynamic nature of business environments. Enacting both continuity and change in the music world, composer and artist Max Richter is introducing classical music and orchestras to unlikely audiences – those suffering from digitally overloaded brains. When it comes to pursing CSR (Corporate Social Responsibility) for profits and moral values alike, the leaders at Haagen-Dazs set an example by partnering with a society for invertebrate conservation to save the honeybees. Along the same lines, Mark Constantine at LUSH soaps is famous for his provocative campaigns against fox hunting, fracking, and international trade. 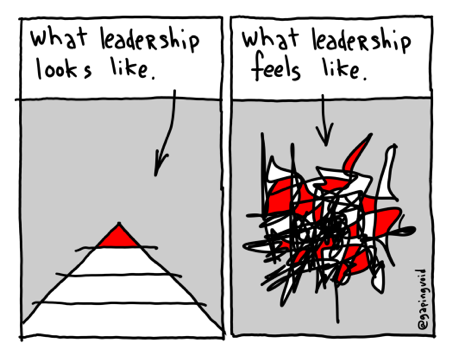 Resolving the paradoxes one strategy at a time

Resolving leadership paradoxes, while difficult, is certainly not impossible. In their article, Waldman & Bowen put forward a set of measures (strategies) for each of the four.

The first paradox, maintaining a strong sense of self while also demonstrating humility, for example, calls for productive narcissists. While counter-intuitive, narcissism can safely co-exist with humility to the benefit of both followers and leaders. To resolve this paradox, a leader must therefore exert his/her own sense of self, while recognizing weaknesses and the value of others. In other words, to practice empowerment.

When it comes to maintaining control and simultaneously letting go of control, a paradox-savvy leader might blend a contingency approach in the near term (remember Ms Price?), with the intention of letting go of control as an overall, long-term strategy. A leader might also invest heavily in “raising” the next generation of innovators (see family businesses like Nike) or simply exercise strong output control but weaker behavioural control. That is, strictness on the financials and a relaxed attitude towards everything else.

The third paradox, balancing continuity and change, calls for establishing two different operating systems in the company. The first, a traditional hierarchical structure and processes related to the daily running of the business. The second, an agile network dedicated to forward thinking strategies (think of Shell’s Game Changer program & approach) and planned change. To succeed, leaders must combine the philosophy of a start-up company with the resources, experience, and network of an established company. In other words, embrace ambidexterity.

Last but not least, effectively pursuing CSR for both profits and moral purposes calls for a much simpler solution: sincerity. Citing the many instances in which leaders fail to convince boards, customers and the broader public of their intentions, Waldman & Bowen recommend not stressing the moral values as a basis for CSR initiatives at all unless they are authentically felt and communicated. In other words, do not deal with the paradox in the first place.

Take-aways and traps to avoid

Paradox-savvy leadership is all about balancing opposites while still retaining the ability to function (Yes, F. Scott Fitzgerald’s quote applies).

As the examples from various industries show, a paradox-savvy leader will approach paradoxes from a both/and rather than an either/or mind-set. Moreover he or she will do so with caution knowing that every strategic move has an effect on individual followers and the greater organization.

Bringing the discussion about paradox-leadership to a close, professors Waldman & Bowen, note three traps to avoid in the process of becoming an admired and effective leader: